KT&G will maintain and develop social contribution activities systematically.
KT&G is carrying out differentiated social contribution activities. Representative activities include the Young Entrepreneurship Support Project, the Sangsang Fund, and the Sangsang Madang. Through these efforts, we will fulfill our responsibilities as a corporate citizen.
We are also implementing social responsibilities related to our business, such as establishing an advanced smoking culture that cares about each other. We are also organically cooperating with outside professional organizations to ensure effectiveness and sustainability.

KT&G operates a program to find and develop differentiated entrepreneurs from 2017 in order to cheer up and open opportunities for the precious dreams of the future talent. The 'KT&G Sangsang Start-up Camp', which was launched in October 2017, is a program for finding and developing entrepreneurs, which selects pre-founders who dream of social innovation start-up and provides them with 14-week professional curriculum. The selected teams are also provided with commercialization assistance, overseas exploration opportunities, and office space. In addition, KT&G is establishing a dedicated platform to provide a stable foundation for young entrepreneurship support projects.

Applying 'Matching Grant' system to encourage employees to participate in donations. The Sangsang Fund, launched in March 2011, not only supports the domestic and foreign underprivileged, but also helps solve urgent social problems. It also emphasizes voluntary and transparent operation through the 'Sangsang Fund Operation Committee' composed of only ordinary employees.

Company
Proceeding 1:1 Matching Grant
depending on the size of the fund

As a global corporate citizen, KT&G participates in resolving global issues by referring to UN SDG's 17 goals such as poverty / housing / environment. We are practicing the management philosophy of 'Corporate Partnership' all over the world through customized CSR considering the specific characteristics of each country, such as establishing facilities, creating an independent environment, and protecting the environment. 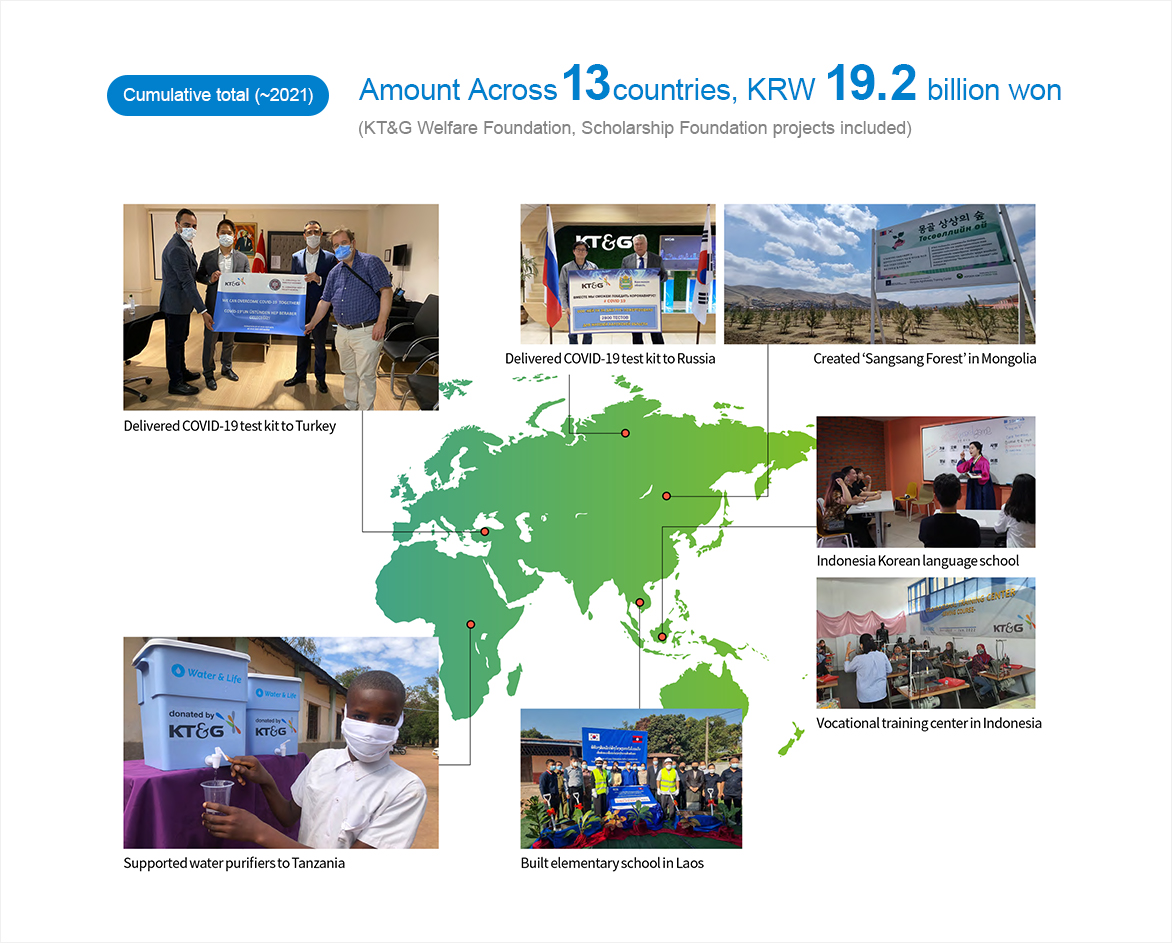 KT&G is carrying out direct and indirect projects to establish an advanced smoking culture as part of its business-related social responsibility projects. We will fulfill our responsibilities for a mature civil society that cares and understands each other through the support of related industries such as making and distributing portable ashtrays, smoking box etiquette pictogram campaign, improvement of smoking facilities in public facilities.
Also, we are actively encouraging the participation of employees, such as awarding excellent service employees and providing opportunities for overseas service.