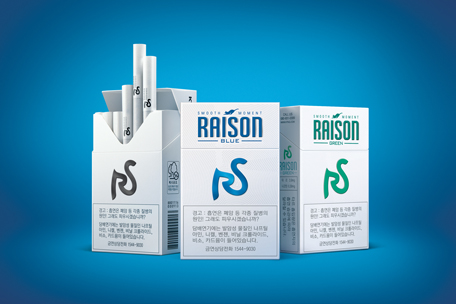 RAISON, which has been enjoying popularity with its enduring quality and flavor, has kept pace with the rapidly changing consumer trends since its launch in 2002 through three renewals. In this fourth renewal, it has tried to transform itself again.

The three brands, RAISON BLACK, RAISON BLUE, and RAISON GREEN, have been renewed. The mild image of RAISON was bolstered through the use of curved wave patterns for the whole pack, and neatness was emphasized by using white as a uniform ground color.

Also, taking the letters ‘R’ and ‘S’ from RAISON, its unique character cat was cleverly expressed, and the product name was enlarged by using a new font and was arranged at the top of the pack so that consumers could identify it at a glance.

KT&G RAISON team leader Kim Gwan-jung said, “RAISON has set the trend through constant renewal and launch of limited versions,” adding that “consumer response to the new design has been favorable, so the level of consumer satisfaction is expected to be raised through this renewal.”

The price of the renewed RAISON is the same as the existing product: ₩2,500 per pack.