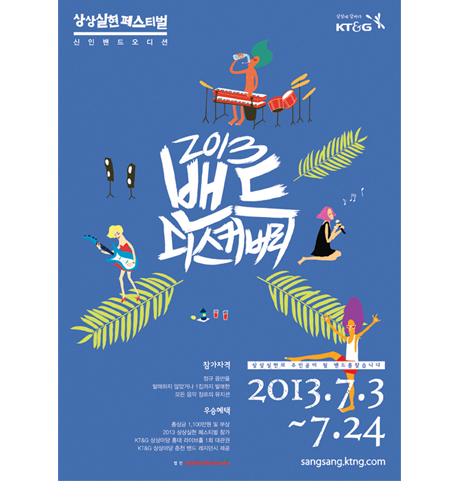 Entry is open to anyone who has not released regular albums or put out their first album. Applications will be complete by introducing the band and registering videos or music files on the website (sangsang.ktng.com).

Six bands are scheduled to be selected from the applicants through the first screening of music, and then the final three bands will be selected through a public contest. For them, various kinds of benefits will be provided, including total cash prizes of ₩11 million, a one-time right to lease the Sangsang Madang live hall, and production of live videos and music. In particular, they will be provided with the “Dream Stage,” which entitles them to perform in the “Sangsang Realization Festival” to be held in November.

A KT&G official said, “‘Band Discovery’ has expanded the range of the participants in ‘Band Incubating’ that has been operated by KT&G for the past five years to support rookie bands,” adding that “this program has been prepared to discover and support rookie musicians who have limited opportunities to perform on stage even though they are qualified.”

In addition to the field of music, KT&G is currently operating various programs to support rookie film directors and professional photographers with potential in their creative activities. KT&G is exerting steady efforts to have win-win relationships with fringe groups and rookie cultured artists, such as discovering new designers and commercializing their works and even assisting with their domestic distribution.