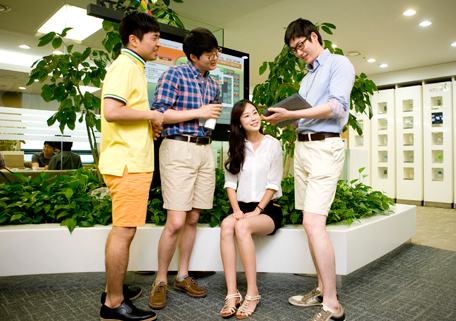 KT&G (CEO Min Young-jin) has implemented an informal dress policy that recommends wearing shorts and sandals to help alleviate power shortages and to create refreshing working conditions in the summer.

This policy, which was adopted last year to reduce electricity usage while maintaining an office temperature above 26℃, received an enthusiastic response, mainly from young employees, and has become established as KT&G’s unique corporate culture. As a crisis situation of power shortages is anticipated, especially early this year, it was decided to further move up its implementation time.

For officers and staff who are not used to informal dress, photo examples of proper outfits have been provided. Guidelines have been established that recommend casual dress within the limits of not losing the dignity of office workers, and suggest wearing half-sleeve collared dress shirts, not-too-short shorts, and shoes with back strings, etc.

KT&G officers and staff heartily welcomed this informal dress policy, showing a positive will to participate in energy conservation. On the company message board, scores of comments were posted in just one day, such as “What a smart policy still alive today,” “We are all gentlemen who are setting examples,” and “In your shorts, you are really something at work.”

KT&G has been turning off all the lights during lunch and after-work hours, while minimizing the operation of air conditioners in the summer for several years now. It is also practicing enterprise-wide energy conservation, such as prohibiting the use of air conditioning during the hours of peak demand in the non-production facilities of manufacturing factories and operating its own emergency generators in crisis situations of power shortages.