Shortcut to text
메뉴닫기
489 THE ONE Etipac is to be Renewed with Enhanced Deodorizing Functions Based 2013.05.09 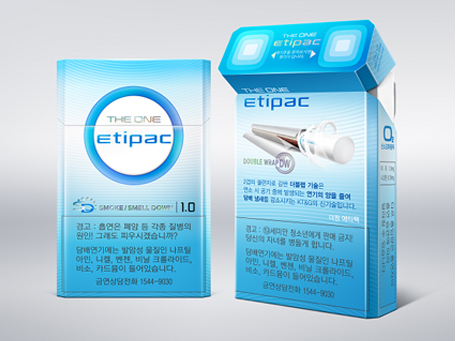 KT&G (CEO Min Young-jin) will renew THE ONE Etipac with an enhanced deodorizing function and milder flavor.

The distinctive features of THE ONE Etipac are its function of reducing smoke and odors through the new technologies of “Double Wrap” and “Fragrance Zone.” Double Wrap is a technology that blocks the smoke twice by wrapping the cigarette in two layers of cigarette paper, and the Fragrance Zone is a patent-pending technology that reduces cigarette odors that remain on the hands because a refreshing lime fragrance is given off when the surface of the pack is rubbed.

The product renewed this time further reduced smoke and odors that are given off from smoking because the cigarette paper newly developed only for THE ONE Etipac was used, and increased consumer convenience by expanding the Fragrance Zone.

The flavor as well as deodorizing function was greatly improved. The unique mildness of THE ONE was enhanced, while improving the natural cigarette flavor by adjusting the mix of raw material leaf and using the same oxygen-enhanced filter as the existing product.

KT&G THE ONE team leader Kim Young-hun said, "Etipac means a pack that contains etiquette," adding that "THE ONE Etipac reduces the inconvenience caused by odors, and so it will increase even more the satisfaction of consumers who want a refreshing flavor, even after smoking.”

The renewed THE ONE Etipac has the same tar content of 1mg and nicotine of 0.1mg as the existing product. The price is also the same: ₩2,500 per pack.