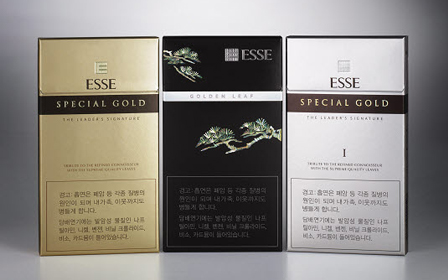 KT&G (CEO Min, Young-Jin) reported that international sales of its ‘Esse’ brand totaled 100.6 billion cigarettes as of the end of last March. Stacked end to end, this number of cigarettes would stretch 250 times around the Earth or reach to the Moon and back 13 times.

Esse is now sold in more than 40 nations around the world, including in Russia, the Middle East and Central Asia, where Esse is ranked one or two among super-slim cigarette products. It entered the Italian and Spanish markets last January with plans to expand across all of Western Europe, including France, Portugal and Austria.

Esse has kept a firm hold on its position as the best-selling cigarette in Korea since 2003. It also took first place in the Korean brand power index (K-BPI) presented by Korea Management Association Consulting for five consecutive years, as well as the first rank of the National Brand Competitiveness Index (NBCI) by Korean Productivity Center for three years in a row.

An official from KT&G stated, “Regardless of the political instability taking place in the Middle East and Central Asia when we were starting out, the company expressed its determination to enter these markets and Esse is now positioned as the top super-slim cigarette product due to thorough localization and luxury-only strategies.” He concluded, “KT&G will further strengthen Esse’s reputation as the world’s best super-slim cigarettes.”