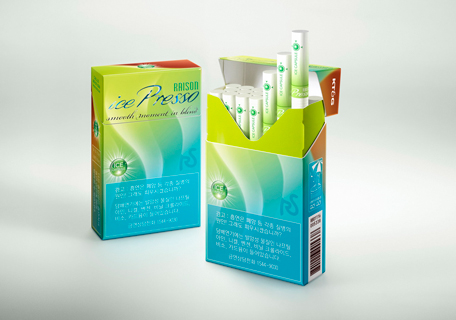 The distinctive feature of RAISON Ice Presso is that when a consumer bursts the ice capsule in the filter at the desired time while smoking, the unique flavor of RAISON Presso changes into a refreshing flavor, allowing the concurrent enjoyment of two flavors at the consumer’s option.

On the front and back of the pack, mint and brown colors are used to express the product features related to the two flavors, and the refreshing flavor is highlighted by placing an image of an ice capsule on the package design.

RAISON Presso, launched in July of last year after about four years of R&D, has pioneered a new concept market with its flavor clearly different from those of the existing products. At the initial launch, its sales dramatically increased mainly in the areas around the university campuses where young people are concentrated, and became tremendously popular to the point of being in short supply. So far, more than 500 million cigarettes have been sold.

KT&G’s RAISON team leader Kim Gwan-jung said, “RAISON Ice Presso is the third of the RAISON Presso product line most loved among the new products released last year,” adding that “with the launch of this new product, consumers can have a variety of choices that suit their tastes.”