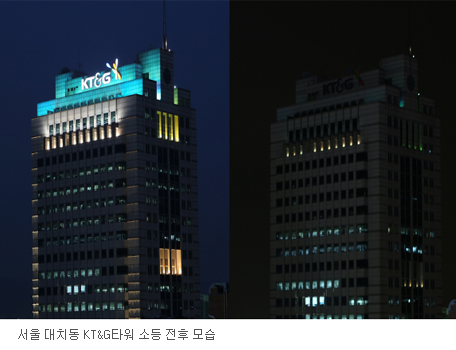 These measures, to be implemented with the slogan “KT&G’s Good Wind This Summer,” is aimed at reducing office power usage by more than 15% compared to last year and by over 13% for the production sites. For this purpose, the operation of air conditioners and use of lights are planned to be controlled to the fullest extent possible, and working hours are to be flexibly operated.

KT&G has decided to maintain office temperatures at over 26˚C in the morning, but to raise this to above 28˚C between 2 and 5 p.m., and during these hours plans to stop the operation of the air conditioning system three times for 30 minutes. In addition, it has decided to completely stop the operation of the air-conditioning system during lunch hours and after 5 p.m. During the peak hours of power demand, use of elevators will be partially suspended.

Production sites will maintain their workplace temperature at 25˚C, which is the upper limit for quality assurance, and in the peak hours of electricity demand, working hours will be flexibly adjusted to minimize the operation of the production facilities. It has also been decided that in the stage of “Caution and Warning,” the company’s own generator should be operated.

In addition, KT&G decided to partially or alternately turn off the lights on the widow side of offices, hallways, restrooms, and parking lot, and invites the officers and staff to suggest energy conservation solutions.

A KT&G official said, “KT&G has actively pursued its policies to have win-win relationships with people in various walks of life in society, such as mutual growth with SMEs and support for underprivileged people,” adding that “we have implemented stronger measures to actively participate to overcome the nationwide energy crisis in anticipation of the worst crisis of power shortage in the nation’s history.”

In addition, KT&G is constantly exerting diverse efforts to conserve energy such as utilizing surplus steam energy in the facilities near the plant, turning off all the lights after working hours, and wearing cool business suits.