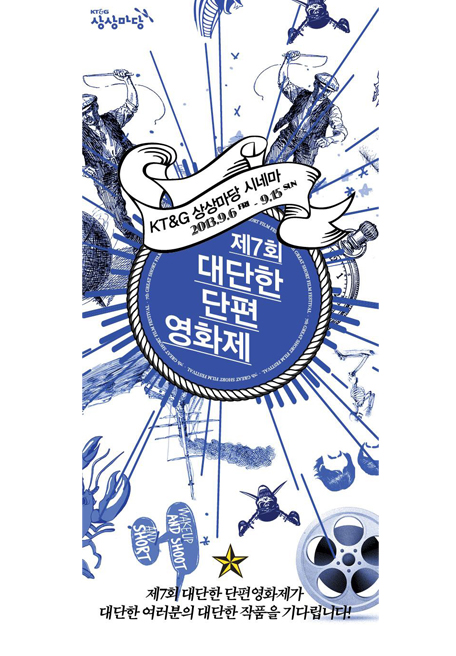 KT&G (CEO Min Young-jin) is inviting short films that will be shown in the “Great Short Film Festival” on June 21. Entry is open to anyone who is a local resident or a foreigner. Applicants are requested to submit to the Film Business Team of KT&G Sangsang Madang a DVD containing their works produced after June 1, 2012 with a running time of less than 20 minutes together with an application for entry.

The works that pass the preliminaries are scheduled to be shown in the “Great Short Film Festival” to be held this coming September, and a total of five works will be selected from them, and cash prizes and trophies will be awarded. For further details, visit the homepage at (www.sangsangmadang.com).

The “Great Short Film Festival,” which is marking its seventh anniversary, is one of the representative domestic short film festivals that discover and support excellent short films. Last year’s award-winner, “Cheong,” directed by Kim Jeong-in, received the special award for short film in the 2013 Berlin International Film Festival, and the prize winner at the fifth festival, “Guest,” directed by Yoon Ga-eun, attracted attention by receiving the grand prize in the International Short Film Festival in Clermont Ferrand.

A KT&G official said, “you can feel an epigrammatic fun and aesthetics out of short films made in a variety of materials and formats,” adding that “it will be a good opportunity for film creators who cannot find a stage to meet audiences, even though they worked very hard to produce their works.”

KT&G also invites works for the “Great Full-Length Film Release Project” from this year to support the release of full-length films. Entries will be those films produced after January 1, 2012 with a running time longer than 60 minutes. Selected works are entitled to receive overall support with respect to the process of release such as post filmmaking work, marketing, and distribution.