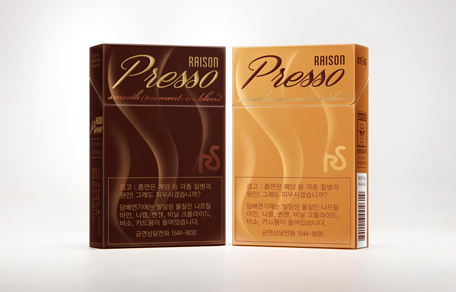 The name RAISON Café will be changed to “RAISON Presso.”

KT&G (CEO Min Young-jin) announced that it would change the name of RAISON Café to RAISON Presso for sale on the market, because using expressions for aromatizing material has been restricted due to a revision of the related law. Presso means “friendly” or “close” in Italian.

RAISON Presso has pioneered a new concept market with its features, such as a distinctive fragrance and filter, which are clearly different from existing products, and gained unbroken popularity, mainly around university campuses where young people are concentrated, since its launch in July last year. So far, about 500 million RAISON Presso cigarettes have been sold.

Along with the name, the design has also been changed. The product’s unique mild and rich flavor has been expressed by using elegant curved stripes on a brown background and by placing the Presso logo on the top of the pack, consumer convenience with respect to purchasing has been increased. In addition, RAISON’s unique cat character has been cleverly expressed by using the letters “R” and “S” in RAISON.

KT&G RAISON team leader Kim Gwan-jung said, “The consumer satisfaction level is expected to increase even higher, because the product name and design have become more refined than before, but its flavor remains the same as the existing product.”

The renewed RAISON Presso is released in two types: tar 1.0mg and 6.0mg. The price is the same as the existing product. ₩2,500 per pack.