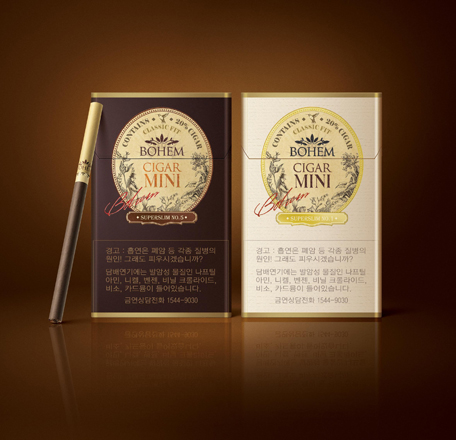 BOHEM CIGAR MINI contains cigar leaf of South American origin, including from Cuba, for 20% of its raw material leaf tobacco. Its distinctive feature is that it has realized the distinctive, gratifying feeling of a cigar by wrapping cigarettes that contain cigar leaves with cigarette paper. The cigar wrapping method, which involves rolling up a super slim cigarette in cigarette paper that contains cigar leaves, is KT&G’s unique, proprietary technology realized for the first time in the world.

BOHEM CIGAR MINI is a product that has increased the convenience of portability by adopting a length of 84mm to this super-slim cigarette, and is the smallest-sized cigarette on the domestic market. The image of a hummingbird, the world’s smallest bird, in the center of the pack and inside the lid expresses the distinctive features of the small but substantial BOHEM CIGAR MINI.

KT&G BOHEM team leader Kwon Min-seok said, “BOHEM CIGAR MINI looks slim, but brings out fine flavor,” adding that “although it is slim, consumers will be able to get a taste of its distinctive, rich Cuban-style flavor from it.”

Two types of BOHEM CIGAR MINI are being offered, with 5mg and 1mg tar content. The selling price is ₩2,500 per pack.